The National Alliance for Doctoral Studies in the Mathematical Sciences, now best known as the Math Alliance was founded in 2001 as a partnership between the math sciences departments at the three Iowa State Regents universities (University of Iowa, Iowa State Universityand University of Northern Iowa) together with math departments at four Historically Black Colleges and Universities (HBCUs) (Alabama A&M University, Benedict College (South Carolina), Florida A&M University and Jackson State University). Its original name – the Alliance for the Production of African American Ph.D.s in the Mathematical Sciences — reflected the shared concern of the partners that African Americans were significantly underrepresented at all levels in these fields. Support for the Alliance was applied for and received from the National Science Foundation Division of Mathematical Sciences (NSF/DMS) in 2002. A second grant to support the Alliance was awarded by the NSF/DMS EMSW21-MCTP program in 2005.

From the beginning, the Alliance was organized as a community of mentors and students. The students, who were undergraduates at the four HBCU Alliance partners, were called Alliance Scholars. They each received a stipend and they were invited to the Alliance Summer Research Experience held jointly at the three Iowa Regents universities. Each student had an undergraduate mentor at his or her home institution as well as a graduate mentor at one of the Iowa schools. 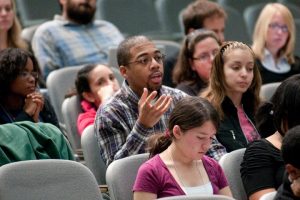